Jack and the Beanstalk is now a pillow, about 12″x16″. It is hand embroidered, my own design, inspired by a book of fairy tales. This has an overlap opening on the back.
And I finished the Mermaid and Troubadour pillow, about 15″ by 16″. This is my favorite one. It has a side zipper.
Here are the backs. Jack has blue and green. Mermaid has lavender and multicolor.

I worked on this for several more hours. Then I took this picture, with no flash. It is truer color than the others, and there is less bounce back from the shiny stuff. What do you think, better?

The work so far, wool yarn and cotton thread, some hand dyed.

I have a new book for inspiration , Free Form Embroidery by Judith Baker Montano. So I started a new piece. It is raw edge appliqué, hand embroidery with thread, floss, cotton and wool. It’s a landscape, and I’m having fun doodling with my needle as I go, a good project to off the new year.

I forgot to post these, I’ve been so busy stitching them. These will be pillows, 12-14″, for sale at the TwoTwelve Arts Center holiday sale.

This is the newest Fairy Tale embroidery. It was my sons’ favorite story when he was young, and his Grandma recited it for him many times. I’ll make this into a pillow after I quilt it. 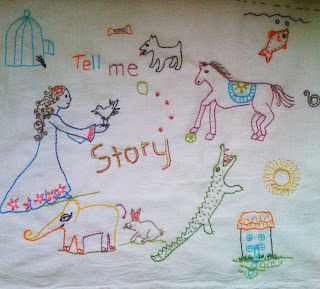 A new embroidery, for another pillow. This one is Tell Me a Story. It features a Princess, who is talking with the little bird who has landed on her hand. He flew out of the cage. A little dog watches them. The Princess’s horse waits patiently to resume the ball game they were playing.
Nearby, an elephant is being tailed by a rabbit. And an alligator has left his house, to go after the goldfish which just swam past the horse. It was a nice, sunny day.
Number 137 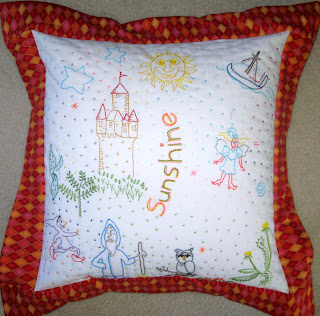 The Sunshine pillow is done. This is a big one. The white part is 20″ sq.
This story began in a castle. Magical things always start around castles. The first thing on the scene was the running elf. I didn’t know what he was running from, but the gnome is standing by to help if needed. Meanwhile some dandelions started growing in the corner, you know how fast they come up. And a wise owl landed on a nearby branch, looking mysterious. Maybe he was an omen that a fairy was in the area? Because she flew in, sprinkling swirls and stars. A boat sailing on it’s own wave appeared, and it became a sunny day and starry night, at the same time.
Now I should finish 3 more pillows that I embroidered a long time ago, before starting another one. Let’s see if I can. 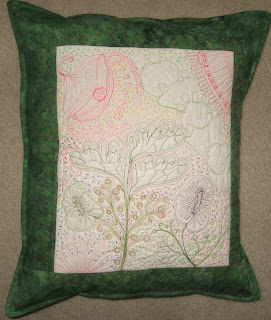 This pillow was a quilt mounted on a canvas until I removed it, and made a pillow. Number 63 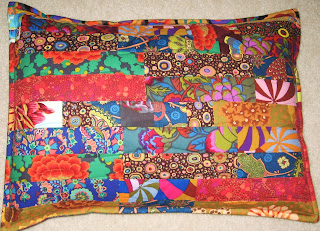 This pillow was made from scraps left from one of the quilt tops I made this week. 64
I also made curtains for my guest room today, and will post them when I get a rod and hang them.